An Exciting Career with the U.S. Department of State, be sure to join their webinar on June 20th to learn more about MBA opportunities

Melinda Pavek
Carlson School MBA 2003
Foreign Service Officer, U.S. Department of State
Every day, in my career as a Foreign Service Officer with the Department of State (DOS), I apply the skills that I learned and practiced in the Carlson School MBA Program and through the Carlson Consulting Enterprise consulting engagements.  In eight years with DOS I have gone from being an entry level officer to the Deputy Chief of Mission (second in command after the Ambassador) in a U.S. Embassy.  I attribute my speedy rise through the diplomatic ranks to the interpersonal, analytic, negotiation and political skills that I learned and honed at Carlson.  Working for the government is the hardest job I have ever loved, and infinitely more challenging than private industry, but a Carlson MBA has helped me, as it will help you, to survive and thrive. 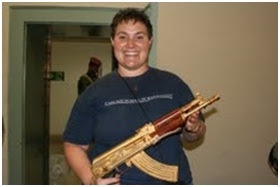 I am currently Special Assistant to the Assistant Secretary for Administration.  My portfolio includes the Offices of Operations, Global Information Services, Emergency Management, Presidential Travel and Foreign Service outreach.  From August 2012, I will be the Deputy Chief of Mission at the U.S. Embassy in Bandar Seri Begawan Brunei.  I have also served as Assistant General Services Officer in Kathmandu Nepal, Consular Officer in Kingston Jamaica, Regional Management Officer in Baghdad Iraq, and Management Officer in Lahore Pakistan.

This career has given me some amazing stories and allowed me to play a role in history.  The group photo below was taken when Secretary Clinton visited Lahore in October 2010.  The second photo was taken in 2009 the day I helped to inventory the vault that contained Saddam Hussein’s seized treasures in order to turn them over to the Iraqi government.  I especially like that I am wearing a CSOM T-shirt and posing with Saddam’s favorite gold gun.
Posted by Jessica at 8:22 AM